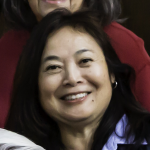 Debbie Fagen  is a Director for the League of Women Voters of California. Debbie joined the League in January 2017 and serves as the co-Chair of the Advocacy Committee for the League of Women Voters Pasadena Area. She championed her chapter’s efforts for the Schools and Communities First campaign, gathering signatures to help qualify the measure for the November 2020 ballot, and has been influential in elevating the LWVPA’s presence at political rallies and marches.

A native Californian, Debbie is a graduate of the University of Redlands in Business Administration and has spent the majority of her professional career in computing. Her career has included working for the Jet Propulsion Laboratory and the J. Paul Getty Trust before retiring. Debbie is married with two daughters and proudly describes herself as a mother, wife and friend. When asked about her interests she says she is an animal lover, admits to having an insatiable sweet tooth, enjoys acquiring new knowledge, and Taiko drumming.