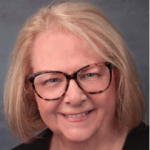 At the state level, Caroline currently serves as Secretary, and is a member of the Executive and Personnel Committees. She is also the Southern Coordinator of the LWVC Management Training Advisor Program (MTAs), and the MTA for several local Leagues. She chaired the 2013-2015 LWVC Nominating Committee, and served on the Board of Directors from 2009-2013. Caroline has enjoyed continuous LWV membership in various California Leagues since initially joining the LWV of Tulare County in 1968. She has held most portfolios at the local League level, and is President of the LWV East San Gabriel Valley.

At the national level, Caroline joined the LWVUS Shur Fellow Program, and served from 2015 through 2018. She previously participated in the LWVUS MRI Program (known as MGIK in CA) as a coach to five California local Leagues.

A retired Professional City Clerk/Treasurer, she is a past president of the City Clerks Association of California and holds membership in various professional organizations, including the National Association of Parliamentarians.
Caroline resides in Covina with her husband Lloyd de Llamas. They have two daughters and a grand dog.