When the People Draw the Lines 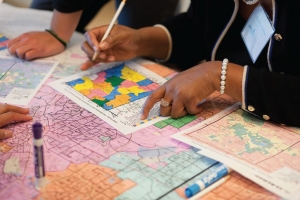 In the past decade, California voters have worked to increase their voice in the democratic process through passing laws that wrestled power from California legislators. Through Propositions 11 and 20, Californians took a stand and stated that they should be the ones leading the process for drawing Assembly, Congressional and Senate district lines.

In 2010, this line drawing process advanced when the California Bureau of State Audits (BSA) selected a new California Citizens Redistricting Commission (CRC) tasked with guiding an independent redistricting process. The 14-person commission accomplished the complex task of redrawing 177 districts in only eight months.

A new report “When the People Draw the Lines,” finds that California’s first citizen-led redistricting commission successfully democratized redistricting in the state. In fact, among the estimated 1/3 of the voters who were familiar with the work of the commission, over 66% of the public approved of the CRC district maps.

The report, commissioned by the League of Women Voters of California in partnership with The James Irvine Foundation, found that the commission made a concerted effort to make the process more democratic and nonpartisan. In particular, the commission effectively gathered input from Californians through developing a statewide campaign with public meetings, open databases and online engagement.

Apply to be on the new Citizens Redistricting Committee!

California is better when we all work together