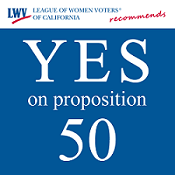 Suspension of Legislators--Proposition 50 would give the Legislature clear authority to discipline Senators or Assembly Members by suspending them without pay. Lawmakers should be able to hold their own colleagues accountable if they breach the public’s trust. This commonsense measure was placed on the ballot with strong bipartisan support.

It is currently possible to suspend legislators, but not to suspend their salary or benefits. This measure would allow, but not require, the Legislature to suspend a member and deem the salary and benefits forfeited.

Such actions are highly unusual. Over the years, five senators have been expelled, and several senators accused of corruption resigned in 1985. The Assembly has never suspended or expelled a member.

The League of Women Voters supports measures that promote an open governmental system that is representative, accountable, and responsive.

Proposition 50 would amend the state Constitution to give the California Legislature clear authority to suspend members of the Senate or Assembly without pay,

The measure is a simple and straightforward way for lawmakers to hold their own colleagues accountable for breaching the public’s trust.

Currently, the California Constitution does not make it clear that the Legislature can suspend its members without pay.  This issue came to light in 2014 when three state senators – all charged with criminal offenses – were suspended by a resolution of the Senate.

But those members continued to receive their salaries – more than $95,000 a year – because it was not clear that the Senate had the authority to suspend their pay, as well.

The incident frustrated lawmakers who wanted to hold their own members accountable, and angered the public, which saw it as another example of how lawmakers are shielded from the consequences of their own actions and play by a different set of rules than everyone else.

“It's an aggravating situation that allows full pay for no work,” opined the San Francisco Chronicle, urging lawmakers to fix the loophole.

The Legislature took it upon themselves to do just that.  Lawmakers wrote and passed – overwhelmingly and with strong bipartisan support – this constitutional amendment and placed it before voters for their approval.

The National Conference of State Legislatures believes the power to discipline and expel members is inherent to a legislative body. That power has long been a staple of American democracy.  It is common practice in most states.

The California Legislature has the power to expel members, and it should have the authority to suspend them without pay should the circumstances warrant.

Californians want and deserve a government that is worthy of their trust.  Voters have passed many political reforms in the last decade to improve the governance in California, but more needs to be done to restore the public trust.

Proposition 50 is a commonsense step that would give lawmakers the authority to police their own, which is the right next step to holding all lawmakers accountable for serving the public interest.

That’s why fair-minded Californians support Proposition 50. Share our Vote with the League flier with you family friends.

You can use our Sample Letter to the Editor (in the Action Guide, below) to urge your community members to vote YES on Prop 50.

Share our Vote with the League flier with your family and friends. Vote June 7.

We support Proposition 50, Suspension of Legislators, on the June 7 ballot.