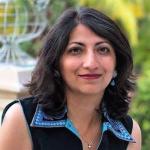 Aisha Piracha-Zakariya is a Director for the League of Women Voters of California. She served the Palo Alto League as their board President from 2018-19, and as First Vice President (2017-18), after she joined the League in December 2016. Aisha continues to serve on their communications, advocacy and board development teams, and is also chairing the Census 2020 efforts with her local League. She helped to increase outreach, community engagement and visibility of the League, and promoted innovative voter service programs to register youth, using creative GOTV strategies to engage newly registered high school voters. More recently, along with her LWVPA Board and colleagues from the LWV Santa Clara County, she advocated for the adoption of the Voter’s Choice Act for the county, which gives voters the choice of where, when and how to cast their ballots in 2020.

Professionally, Aisha is a digital marketing and communications strategy consultant with over two decades of experience in both the private and nonprofit sectors. Previously, Aisha worked in New York City’s financial sector at JP Morgan as well as Donaldson, Lufkin & Jenrette, before founding her startup, Allergy Exchange. Through her nonprofit advisory involvement over the past decade, she has worked to level the playing field for under-served communities. She has worked to promote women’s empowerment with Behbud, a women’s advocacy organization in her country of origin, Pakistan. Locally, Aisha has served as Trustee and Board Chair at the Gunn High School Scholarship Foundation in Palo Alto, which provides needs-based college scholarships to students in her community.

Aisha holds a BA from Smith College in Development Economics & Government. She grew up in Laos, Thailand and the Philippines, as her father’s work at UNICEF took her around the world, before attending high school in Greenwich, Connecticut. She speaks Thai, French and Urdu. Aisha has been living in Palo Alto with her husband, daughter and son since 2005, after moving from Boston. Aisha’s work with the League has instilled in her, an immense sense of duty and commitment to ensure that the League’s mission to make democracy work by advocating on policy issues and encouraging voters to engage in civic life, continues into the next 100 years.