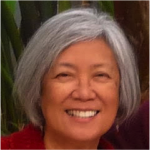 Carolina is a retired educator, who joined the Los Angeles League in the fall of 2013 and has been active on their Youth Outreach and Human Trafficking Committees. She is currently Co-Chair of the LWVC Criminal Justice Reform Committee and represents LWVLA in a coalition for Los Angeles Campaign Finance Reform. Her father was an immigrant from the Philippines in the 1920s. He met her mother in the Philippines during World War II while she was working for an Armed Forces Auxiliary. Her mother was devoted to community service and certainly was a model for Carolina.

Carolina’s teaching career was varied: she taught math and technology, was a coordinator for multicultural education and mentored new teachers.