For 100 years the League has stood strong, growing into the vital force we are today: changing our political system and supporting millions of voters. Across California, we continue to positively impact our communities across generations.
As a women-led organization, we believe in the power of women to create a more perfect democracy.

In 2020, we celebrate 100 years of League work through the inter-generational stories of our members as part of our She is Me campaign. 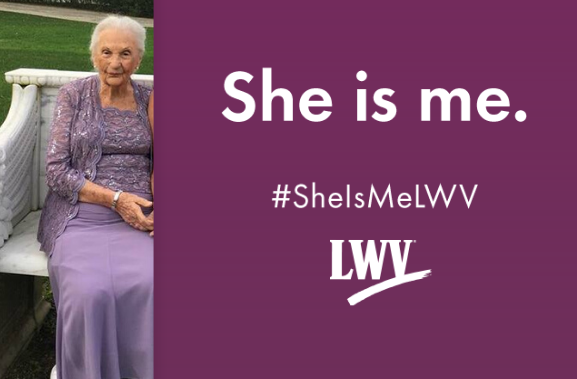 We spoke with a very special woman on her 100th birthday about her life as a League member. Meet Rita Barschak, a 65-year-plus member of the League of Women Voters.

Rita Zlochiver was born into a loving Jewish family in Hartford, Connecticut. As the fifth child, Rita recalls a delightful childhood despite being very poor. After high school, Rita reconnected with former classmate Richard Barschak upon his return from veterinary school and married him, moving to Detroit, Michigan, for war-time employment, then to Southern California after the war in 1945.

While in her 40s and living in Southern California raising her three children, Rita had an older friend who brought her to a League of Women Voters meeting in Beverly Hills.

“I was interested in politics, and I was very liberal,” she recalls. “What I liked about the League, I never knew who was a Republican or a Democrat. It had nothing to do with the League and we just looked at the issues... I didn’t care and they didn’t care about party affiliation.”

From that day forward, Rita was an active member of the Beverly Hills and later the Los Angeles Leagues, working as President, Action Chair, Co-President, Study Chair, and any role that needed to be filled. “The most important thing League does is action - such an important part of our work. I really push that League doesn’t just study but that we take action.”

Over the years, Rita’s League experience extended beyond Los Angeles. In the 1960s Rita found herself at her first LWV Convention in Chicago: “Being in a room with 1,500 women who were all intelligent and committed to improving their communities, regardless of political party, was one of the most energizing experiences of my League life.”

Rita applied the expertise she’d gained in her local Leagues to statewide issues when from 1989-1993 she served on the LWVC Board as the Government Director focusing on studies as well as key issues: campaign finance, initiative and referendum, and voting rights. Notably, Rita was part of a trailblazing delegation that honored California Legislator Shirley Temple Black in Czechoslovakia during the Velvet Revolution. The 13-member delegation hosted an awards ceremony which included the President of Czechoslovakia, the Head of the Red Cross, and other high ranking officials. Rita’s delegation held signs that read, “The LWVC stands with the people of Czechoslovakia.”

From Rita’s first local League meeting to attending national conventions, the League provided opportunities for her to learn from and be inspired by other League members. “I’m grateful to the League for what I learned. The things I learned made me want to take action. Also, I had Trudy Schafer as a mentor, and Trudy represented everything that was wonderful about the League. I remember her with great love.”

Among her many accomplishments, Rita feels her work during the early 1980s in Los Angeles to improve and expand rapid transit remains her proudest legacy. The LWV LA County supported Proposition A, which raised the needed funds to reach more riders in often overlooked neighborhoods. Rita was the face of the campaign and won the votes needed to pass the measure.

Rita’s mother, a Russian immigrant, was not able to cast a vote even after women achieved suffrage. Rita herself voted for the first time at age 21 and in every election since, adding, “Your vote is your voice, and if you don’t speak out that is your problem.”

When asked why should someone join the League today Rita replied, “For the same reasons we did - we want to make some kind of impression, have some effect on what is going on in our lives. When you join the League, you do - you take part in a political system which is a tremendous part of our lives”.

What Does Rita think the League could do better in the next centennial? “I don’t think we are getting the publicity we deserve. We have had many successes, even those who don’t agree with us recognize that we are important. We are a women’s organization and that is important.”

In her spare time, Rita enjoys spending time with daughter, her five grandchildren, and three great grandchildren along with attending her book club. She still actively supports her local and state Leagues by attending events and through her generous financial contributions. Rita sees our advocacy work to reform Proposition 13 (as part of our Schools and Communities First Campaign) a priority issue to improve the lives of Californians.

You can give to the League in many ways:

Magnify Our Voice! Join Us!

Ready to roll up your sleeves and do the education and organizing work to safeguard democracy?  Or maybe looking for a way to stay up to date on the issues and take the occasional online action? Either way we welcome you! Membership is open to men and women, citizens and non-citizens of all ages.

100 years ago, we won the right to vote. Today, we are committed to protecting it.

100 years ago, we won the right to vote. Today, we are committed to protecting it.